It's an amazing story of kindness and betrayal, love and indifference, a talented man, whom the hostile circumstances forced to change everything: the profession, country, lifestyle, family. He almost died and still miraculously came back to life. He lost everything, but kept faith in himself and the people around him.  He was born in Georgia, which at the time was one of the republics of the late USSR. He barely remembers his Georgian father, he was raised by his mother, an ethnic Russian. It’s close to impossible to live in Georgia without acquiring cultural traits and wonderful traditions peculiar to its people. That’s why he values ​​friendship so much, cheerful gathering at the table, a good joke, but his main quality is his friendly appeal.

After high school, he went to Moscow and enrolled in one of the best theatrical schools of the country. And after graduation he surprisingly received an invitation to the just opened Jewish musical theater.  For the USSR in the late 70's it was a very unusual theater. After Stalin's purges and the total destruction of Jewish culture in the country, all of a sudden there popped up a theater where actors spoke and sang in Yiddish on the stage. Of course, in many ways it was a propaganda campaign, but the people who created this theater were quite unique. They had to combine diplomatic cunning and resourcefulness in dealing with the party officials, and at the same time to revive Jewish culture in the Soviet Union which seemed to be completely wiped out for many years before that.

The theater became famous. Tickets were always sold out, tours across the country and abroad came one after another, the troupe enjoyed fame and popularity ... 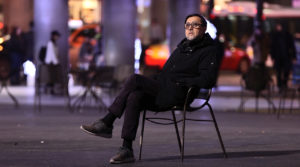 Without being Jewish, he started speaking Yiddish, learned to walk like a Jew, gesticulate like a Jew, laugh and cry like a Jew, and most importantly, he started singing. It turned out that he had a wonderful voice. He became one of the best soloists in the theater.

A few years later the time came to try something new. He left the theater, he was invited for the role of Jesus Christ in the rock opera "Jesus Christ Superstar." It was a time of “perestroika” in the USSR, everything was changing, Iron Curtain collapsed, and it became possible to stage this famous rock opera on the scene of one of the most popular Moscow theaters.

Everything ends eventually, and so did euphoria of “perestroika.” The Soviet Union disintegrated, movie production almost completely stopped, and enjoying performing arts became the last thing in people’s minds. In order to survive, actors became part-time entrepreneurs, settling for small troupes, dealing with the producers, and negotiating their tours all by themselves.  He joined one of those troupes. With only one play in their repertoire, they were touring the Russian cities when suddenly they received an invitation for a tour of Canada. They were exulted, they celebrated the opportunity for the first ever to travel to North America, to meet new people, and to finally earn the real currency.

They arrived in Toronto, elated, ready to amaze the audiences with their performance... when suddenly they were told that the firm that had invited them, went bankrupt, and disclaimed all liabilities for their further stay in Canada.  It was a real shock. Imagine yourself in a foreign country, without the knowledge of the local language, without money, without the slightest understanding of what to do now. The Russian Embassy officials shrugged them off and said that nothing can be done to help them... The very next day, the management of the hotel where they stayed, asked them to leave.

“50 actors and dancers were kicked out of the hotel and on the street. We were sitting in the theater without the things that were also locked in unpaid rooms. On TV there was a report about homeless and hungry Russian actors. The embassy did not lift a finger, with this none-of-our-business attitude... Well, as always... “

Only a miracle could save them, and it did.This report shown on the local TV touched ordinary Canadians, residents of Toronto, many of whom decided to help the unfortunate Russian actors and provide them with lodging in their own homes until the situation clears out. It was absolutely incredible! In the USSR, they have always been taught that in the West “people are wolves to each other” and everyone thinks only of money and his or her own benefit. And all of a sudden they saw such an outpouring of love and sympathy.

He got the shelter in the home of the couple, Andrew and Lisa, people that he will remember and thank forever.  When it rains, it pours. When he was staying with Andrew and Lisa, life delivered him a cruel blow. He became seriously ill with a rare disease, at times hanging between life and death. His new Canadian friends did everything to save him.

He was placed in a hospital, and went through a complex surgery. Somehow the story of his misadventures reached the Government of Canada and by the decision of Ministry of Foreign Affairs his wife and daughter were allowed to come to Canada. In the meantime doctors did everything they could to save his life before they finally succeeded. With recovery came another blow: he lost his voice. He had to say goodbye to the acting profession.

“I got a very rare autoimmune disease: Wegener granulomatosis. As an exception, by the order of the Ministry of Foreign Affairs of Canada, I was admitted to the hospital, where I died on the second day, I was in a coma for a month. I was finally saved, but the tube in the throat has damaged the vocal cords, so my vocal career was over. I was alone, abandoned and unwanted. Scary. My wife was brought to Canada by the actors’ union. I'm in the hospital, weighing just 40 kilo, having trouble speaking, with hair lost after chemotherapy ... Do I still have to describe? Well, I survived.” 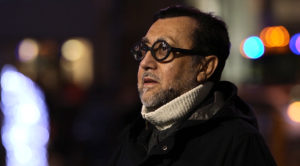 Whatever happened to him, he had to get on his feet, learning the language, getting a profession, a family. He couldn’t go back to Russia, only in Canada doctors were able to provide him with the unique medication to keep him healthy.  Meanwhile he gets new acquaintances, one of them gives him a job in his bakery. He learned to bake cookies. The most important thing was that he was alive, he was sure he could overcome all mishaps and beat all odd.  At this point in his life, he got another blow: his wife left him.

His little daughter made a courageous decision to stay with daddy.  It was his daughter who finally became a major incentive in his life. He alone educated, fed, clothed her, drove her to school, and most importantly, he taught her to sing. He was determined that his daughter had to do what he was deprived of, she should become a singer and perform on stage as he once did.  He tried a lot in his emigrant life, and suddenly and quite unexpectedly came up with a business that has become his new profession: guiding small tours in the city of Toronto. The business which gradually became very popular, and for one simple reason: he fell in love with Toronto and learned so much about it that even people who have lived their entire lives here were absolutely amazed.And if you spice it up with his natural humor and sincere generosity, it would be quite natural why those who had ever attended his tours, remembered them for a very long time.  As, perhaps, our viewers will do as well.  And his daughter did become a singer. She now lives in New York and performs on the stage, and her father goes to her concerts, and probably thinks how bizarre and yet fair life actually is.

“I hope, day trips in my minivan will be loved by all travelers wishing to see and hear Niagara Falls, taste Ontario wines at the local wineries, have a look at Curve Lake Indian reservation, admire the beauty of the St. Lawrence River, or perhaps, Petroglyphs Provincial Park, a sacred place for local Indians with drawings carved on stones, the mysterious messages of ancient Aboriginal Canadians.

Socrates once said his famous phrase, “Do your thing and know thyself,” and I try to live by this principle and continue to learn about myself through my profession, thoughts and real life. In my present work, I am my own director, screenwriter, actor, and even critic. When people ask me what makes my company so different, I provide a very simple answer to this quite a dangerous question: the tour guide’s personality. My tours last from 4 to 12 hours. Sometimes we cannot stay with someone a one single hour, but if people come to me, and then refer me to friends and family, then objectively speaking, I do my job at a good professional and ethical level.”